I’ve heard such great things about this book, it seems like people have been raving about it forever! I didn’t read it when it was first published, despite it being on my Goodreads shelf, because there always seemed to be something else that pipped it at the post and made it onto my monthly TBR. Then, Six of Crows came out and I really wanted to read that, the hype for it over the past few months was fierce. I’m sure some of you will have received my hysterical comments on your own reviews of this series, asking where I should start! The overwhelming consensus was that the first trilogy was worth it, so I might as well start at the very beginning (a very good place to start). I like listening to the demands of the people, and so I picked this book up. 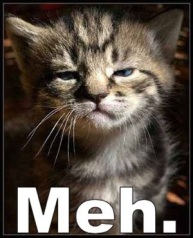 If I needed to sum up my thoughts on this book in a word it would be ‘meh’.

Nothing about this book was strictly ‘bad’, so this review isn’t going to be as savage as my one for What Light or any other 2 star book I’ve reviewed, it just didn’t intrigue me… at all.

In terms of characters, I guess I have to talk about Alina. I could probably do a whole post on things female protagonists do that annoy me, but Alina didn’t really do any of them. Yes, she is her own person. Yes, she saves the dudes. Yes, she is objectively a bad-ass. I must admit I found her whiny in places (especially in the middle of the novel), but still, she really wasn’t that annoying as a protagonist (ahem, America Singer), I just didn’t care about her or her story.

Same with her men folk. Every review I’ve read of this book seems to be in love with the Darkling, but I just thought he wasn’t very well developed. If you look at his character, he’s basically Darth Vader (this opinion may/may not be influenced by my Star Wars marathon yesterday). He wears black, he’s obsessed with power, he has a troubled relationship with his mother, the Fold and the Death Star are different variations of the same thing – to me, he just felt like an undeveloped concept.

However, I did ultimately prefer him to Mal, the Gale of our story… or the Kilorn… or the Aspen… heck, there’s pretty much a variation of Mal in every YA dystopian series every written!

Despite its meh-ness, I did find this world quite intriguing, so I would still consider reading Six of Crows, even if I don’t have any desire to continue in this series.

Overall, I think this review can be summed up by a shoulder shrug. There wasn’t anything expressly wrong with the book, so if you want to read it I wouldn’t want to deter you, but for me, it was a 3/5 stars (probably a 2.5 if Goodreads would let me, but I’m choosing to round up in this instance.)

What did you guys think? Is it just me? Am I just in a bad mood?

6 thoughts on “Shadow and Bone by Leigh Bardugo | Book Review”